Hong Kong — which is home to a number of multi-billion dollar property-led conglomerates founded by bootstrapping immigrants from mainland China — has “excellent connectivity [and is] an excellent place to do business,” Mr. Schmidt said in a speech at the campus of the Chinese University of Hong Kong. Though few details about the partnership are yet public, the company said it will work with the school to offer mentorship to young entrepreneurs and sponsor trips to Google’s headquarters in Mountain View, Calif.

“There’s a myth that entrepreneurs work by themselves,” Mr. Schmidt said. “In fact, they are members of an ecosystem of people who help them.”

Though Hong Kong’s startup ecosystem is still limited, practitioners say it’s growing. Despite high property prices in the financial hub — which is home to one of the world’s highest wealth gaps — cheaper co-working spaces have proliferated, as well as other events to connect entrepreneurs.

Opened two years ago, HK Commons, for example, is a co-working space that currently houses more than 60 companies operating out of its 30,000 square feet of space. 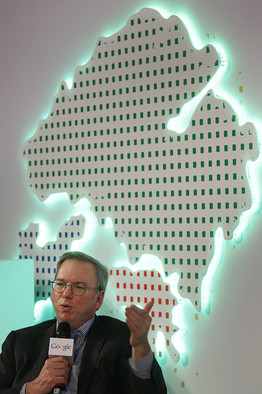 Demand is high: HK Commons founder Jong Lee says that the waitlist to get in is as long as two to three months, and he hopes to triple his available space in the coming year. And while property prices may be high in Hong Kong, he argued, labor costs in the city are far cheaper than in, say, San Francisco. A good programmer, he said, costs a quarter of what it might in the U.S.

While Mr. Schmidt was lavish in his praise of Hong Kong’s entrepreneurial culture, Mr. Lee said that for too long, that spirit has actually been neglected.

“In Hong Kong, it was way too easy for too long to make money the old-fashioned easy way on real-estate speculation,” said Mr. Lee, whose startups include a tailoring shop and a U.S. steak delivery website. “If you’re a family office and you can shoot fish in a barrel, why wouldn’t you?”

But Mr. Lee says those times are ending. Since 2008, residential and commercial property prices in Hong Kong have soared, but with the administration having imposed strict cooling measures in the past year, analysts expect the market to take a tumble.

“At the same time, big financial institutions have drastically reduced their hiring,” he said. “People are going to have to reassess their thinking.”

Google spokeswoman Betty Wong said that the CUHK partnership should “hopefully begin” in the coming months.