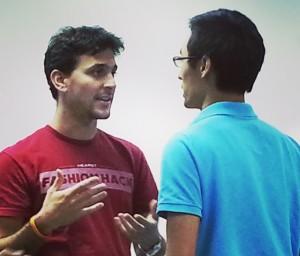 Gregory Gopman is the Co-Founder and CEO of AngelHack and Co-Founder of Hackathon.io, and tonight he’s presenting to a packed house here in Hong Kong hosted by the SME Creativity Center. Three weeks from now Gopman will be hosting a hackathon in Hong Kong where techies will gather to code for a day and a half straight until their eyes dry up from looking at computer screens and drinking gallons of caffeine-laced high fructose corn syrup.

It’s encouraging to see someone like Gopman taking an interest in Hong Kong, a city which, by all rights, should have a well established tech startup scene but which lags other world cities when it comes to geeks per capita and the companies that depend upon a high tech workforce to thrive. Granted, finding good programming talent anywhere is hard. It was hard in Salt Lake City, Utah where I moved from in June, and it’s hard in Silicon Valley, which is why any decent programmer there can make six figures.

Gopman tells a participant “There are plenty of good programmers in Hong Kong,” but it’s hard to draw them to a tech startup. In a culture that values respect for parents and those parents value job stability, programmers tend to gravitate toward the many lucrative jobs available in Hong Kong’s financial industry. Working for a startup also isn’t exactly the best way to attract a mate. Gopman’s hackathon may not change that, but it’s a step in the right direction toward making startups a more acceptable career path.

Jon Buford is a founding member of Hong Kong’s largest startup organization StartupsHK and Founder and CEO of Makible, a manufacturer of 3D printers. Jon agrees there are cultural barriers in Hong Kong that prevent programmers from joining startups, but that things are improving. “We are seeing more developers being open to early stage companies,” Buford says. “Startups are getting more and better media coverage locally and the financial industry is not as stable as it was.” Buford brings up a tactic for securing good developers that most entrepreneurs would prefer not to deal with–creating them. Buford explains, “For Makible, I think as we grow more and if we start hiring more junior level people, it will be harder to find ones with some good experience and that we will have to train them more.”

Perhaps another method of growing Hong Kong’s programmer population is to attract outside tech talent. As Jong Lee, founder of co-work space Hong Kong Commons points out, a $150,000 developer in Silicon Valley costs the company $225,000 when you include benefits and overhead, and the take home pay after taxes and the cost of living comes out to around $4,000 per month. Here in Hong Kong the top marginal personal income tax rate is capped at 15%, rather than 35% in the US. Other than housing the cost of living is quite affordable. “And a $1M private sector health policy here is $1,000 USD per year, not per month,” Lee emphasizes.

What everyone in Hong Kong seems to be in agreement on is that what Hong Kong needs, both to kickstart the tech startup scene, as well as attract programmers to startups, is a home-grown home run. Companies like Microsoft and Intel in the 90s and more recently Facebook and Twitter made programming an acceptable career path in the United States. Alibaba with its much anticipated IPO (which sadly will not be happening on the Hong Kong exchange) may do the same for China. But Hongkongers need their own tech startup hero. A programmer/founder who creates a tech giant and paves the way. Who will step up to the plate?